Today being International Women’s Day, I’ve been thinking about female role models, as have several other blogs and tweets around. There have been plenty of lists on which literary heroines or fictional characters would come up as our top ten, and with a solid smattering of Bronte and Austen heroines standing next to Katniss Everdeen of Hunger Games fame, there is enough variety to appeal to one and all.

Whilst I’d have to admit that Margaret Atwood’s Joan in Lady Oracle more closely resembles who I am, if we’re talking about heroines or role models for who we’d like to be, Chaucer’s The Wife of Bath comes up trumps.

Now, that doesn’t necessarily mean I want to go around marrying multiply and playing cougar, as Julie Walters so wonderfully portrayed the Wife of Bath in the BBC adaptation in 2003. 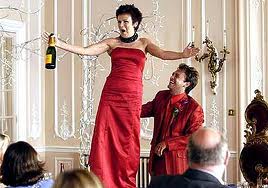 But the Wife of Bath does represent some serious girl power – both in her medieval time and in ours. She refuses to conform to contemporary conventions of womanhood, and with irrepressible enthusiasm and joie de vivre she happily indulges in all that life has to offer with no thought for authority.

But the reason I love the Wife of Bath is for her linguistic playfulness and her role as a woman attempting to rewrite women in the canon. She fills her tale with mini-episodes of transformation, highlighting the way women are adept at adapting to different situations and are able to slide, chameleon-like, into forms that can get them what they want. Rather than seeing this as a terrible necessity of living in a patriarchal world (*yawn*), I would celebrate this ability woman have to get what they want. Their clever flexibility that uses the rules of a particular game to their advantage, rather than loudly demanding that the rules be changed or the game aborted.

The Wife of Bath reminds me of that saying, the one that gets recycled and farmed out by mothers and aunts and grandmothers and older sisters and mother’s best friends at every opportunity. It’s most famous appearance might have been in My Big Fat Greek Wedding, when Tula’s mother turns to her and says,

“the man may be the head of the family, but the woman is the neck, and the neck can turn the head any way she wants.’

This, to me symbolizes the ‘sovereyntee’ women can lay claim to. It’s controversial, I know, to claim that women shouldn’t be the head if they want to, but perhaps there is strength and power to be gained in laying claim to a particularly feminine way of being, one that is just as effective as a male one but perhaps not as clearly dominant – rather than attempting to assert that we’re all the same.

Even the Wife of Bath had to use the language of male scholarship and patriarchal religion to clothe her feminist project, but the fact that she could do that at all is, I think, cause for celebration rather than sadness.

1 thought on “Female ‘Sovereyntee’ and The Wife of Bath”